When the shortlist for the 2013 Fifa Ballon d’Or was announced back in October, not many people will have realised that four out of the 23 nominees played in the Eredivisie at some stage of their career. Even fewer people, however, will have known that two of those four – Arjen Robben and Luis Suarez – kickstarted their European career at Dutch minnows Groningen.

The Euroborg side might not be one of European football’s household names but some of their ex-players certainly are. Former Netherlands internationals such as Ronald Koeman, Erwin Koeman and Adri van Tiggelen – who were all part of the squad that won Euro 1988 – wore the Groningen jersey at some point, while superstars including Robben and Suarez also made headlines at De Trots van het Noorden before moving to greener pastures.

It’s therefore no surprise that Europe’s finest regularly send scouts to the Eredivisie outfit to keep tabs on the club’s latest prodigies and young attacker Richairo Zivkovic in particular has caught the eye in the past 18 months.

Barcelona, Paris Saint-Germain, Manchester City, Liverpool and Ajax have all been in attendance at the Euroborg this season to see the 17-year-old live in action and the striker has not let his admirers down with some fine performances. 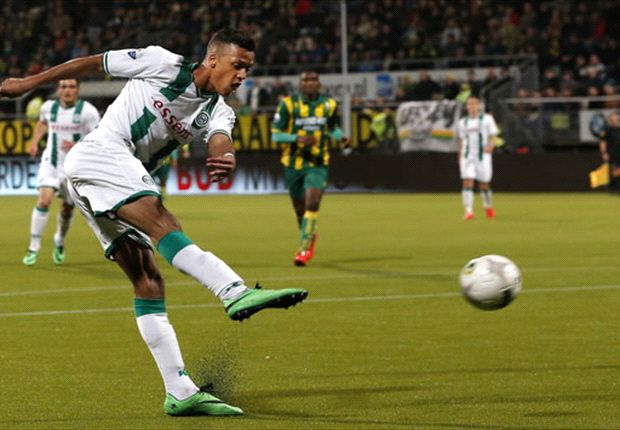 The striker of Serbian heritage made his official first team debut at the tender age of 16 years and 88 days, before erasing Robben’s name from the record books last August when he found the net against NEC to become the youngest goalscorer in Groningen’s history.

This feat quickly saw him dubbed ‘the new Robben’ but it would be wrong to compare Zivkovic to his illustrious compatriot. Whereas the Bayern Munich star is one of the best wingers around in the game, the Netherlands Under-19 star is much more of a traditional striker.

He might have scored ‘only’ six times in 23 Eredivisie games this term, but one should bear in mind that the majority of those appearances came off the bench while playing for a modest club that sit 10th in the league table. More important than his stats is the fact that Zivkovic is clearly blessed with talent in abundance.

The youngster has a positional sense somewhat reminiscent of former Netherlands international Roy Makaay, which often sees him escape the attention of his direct marker and pop up in dangerous positions. He has pace to burn, is not afraid to take on opposing defenders and is remarkably direct as his first instinct is always to go for goal.

Of course, at the tender age of 17, Zivkovic is not the finished product just yet. His decision-making is not at the required level at this stage of his career and he occasionally gets overconfident in possession, too.

These imperfections did not stop Ajax from securing the services of the Groningen wonderkid, however, as they announced earlier this week that Zivkovic has signed a three-year contract at the Amsterdam ArenA in a deal believed to be worth €2.5 million.

The striker might not break into the starting XI with the Eredivisie champions right away, but head coach Frank de Boer has already made it clear that he is a keen admirer of Zivkovic and there’s little doubt that he will get his chances in 2014-15.

“Zivkovic is a very talented player. He is still only 17 and has all the qualities to become a great striker. I think he can take the next step in his career at Ajax, working with someone like Dennis Bergkamp among others,” De Boer said of the young attacker.

With the Arsenal legend as his mentor next season, Zivkovic is in good hands and Ajax will be hopeful that they have a top-class No.9 in their ranks again at last.

Since the departure of Suarez in January 2011, not a single Ajax player has hit the 15-goal mark in the Eredivisie, with the side reliant on the impressive scoring feats of midfielder Siem de Jong far too often. But Zivkovic might very well be the next former Groningen star to shine for the Godenzonen.