When the Champions League quarter-finals were drawn, the standout tie was undoubtedly Bayern Munich’s clash with Manchester United. One side was staggering from crisis to crisis – from disheartening defeat to disheartening defeat – the other on the verge of wrapping up the domestic title in record time.

Yet, with the first leg at Old Trafford completed, the two teams stand at eye level – the Bavarians needing Bastian Schweinsteiger to cancel out Nemanja Vidic’s second half opener.

Sure, David Moyes’ men produced a spirited performance to frustrate the European champions, defending stoically and attacking with intent, but Pep Guardiola’s men have no one to blame but themselves after an underpar display.

The first half began in customary fashion. Bayern have often been slow starters this season, taking time to get into games before killing off their opponents, but as time wore on they began to take control, stroking the ball about in the United half with noticeable ease.

Except that’s just about all they did before the break. Bayern bossed possession, having control of the ball for 78% of the opening period, but did precious little with their dominance. Indeed, the best chance before half-time fell to the hosts, but Danny Welbeck fluffed his lines when clean through.

For all of their territorial domination, the closest the Bavarians came to breaking the deadlock was a rare long-range punt from Arjen Robben, which had David de Gea scrambling across his goalline. It was their only shot on target. 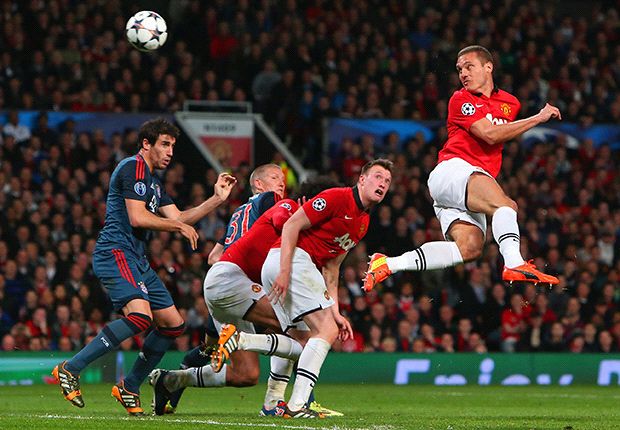 The second half began in much the same fashion, except this time, United inflicted some damage. A corner was whipped in from the left wing and Vidic beat his man to arch a header into the net.

The goal sparked Bayern into life. Guardiola reacted immediately, introducing the more direct Mario Mandzukic and the Croat’s influence was almost immediate as he produced a great knock down for Bastian Schweinsteiger to equalise. Upset averted.

But the Old Trafford encounter leaves you wondering whether Bayern are right in pursuing a slow, patient passing game. They produced precious little bite prior to falling behind and their insistence on playing the ball out of defence saw them exposed on more than one occasion.

Against better opposition, they would have been punished more severely and had United not been in a dreadful run of form, they could be staring at Champions League elimination.

As it stands, they will still probably progress to the next round, even without suspended duo Javi Martinez and Schweinsteiger, and should have more than enough to see off a shoddy United team.

But they could be home and hosed already. Bayern have been accused of wasting possession from all quarters this season. In the wake of the 1-1 draw with Arsenal in the last round, Franz Beckenbauer claimed that the Bavarians would become “unwatchable like Barcelona” and would be “passing it backwards on the goal-line.”

After the first-leg of the last-16 clash, where Bayern saw off the 10-man Gunners 2-0, Arsene Wenger was adamant that the team he had faced at the same stage last year was better, arguing “even though we were playing with 10 players, they didn’t really create an awful lot.”

Guardiola’s final season at Barcelona ended with failure in both the Champions League and La Liga thanks to what then Real Madrid boss Jose Mourinho dubbed “sterile possession”. Tuesday night’s slack showing in Manchester must serve as a gentle lesson that he must rein back this approach to avoid falling short with the German champions.