Philipp Lahm is confident that Mesut Ozil will be “devastating” for Arsenal next season – if the club can sign the right striker this summer.

Ozil lifted his first silverware as a Gunners player on Saturday when his side beat Hull City in the FA Cup final at Wembley but his debut season in English football was marked by widespread criticism.

Following some below-par displays over Christmas and into the New Year, the €50 million signing was accused of lacking fight in some quarters but Bayern Munich utility man Lahm says that the playmaker’s talent is obvious and just needs to be properly exploited.

“Anybody who has played with Mesut will tell you how intelligent he is as a player,” Lahm told Goal. “His vision is probably the best I have ever seen and that is why it is so important to have the right striker ahead of him.

“He is a dream for strikers and you saw that with [Cristiano] Ronaldo and [Karim] Benzema when he was at Madrid. If Arsenal can find the right striker who is fast and makes intelligent runs – then Mesut will be devastating next season.” 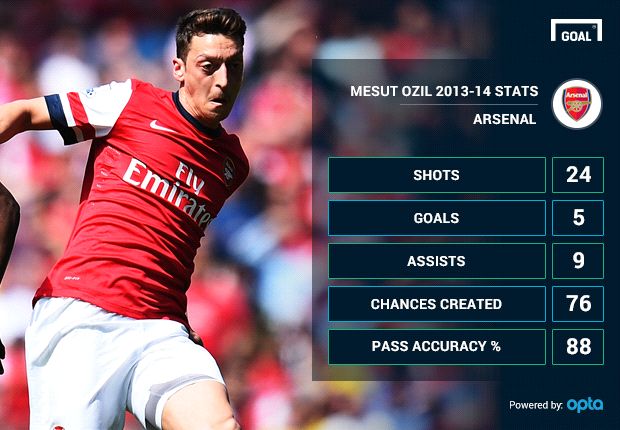 Gunners boss Arsene Wenger was criticised by many of the club’s fans for his failure to sufficiently bolster his squad in January, leaving France striker Olivier Giroud unchallenged as the only quality striker on the books.

Yaya Sanogo has failed to make a positive impact since being introduced to the side after Christmas, while Wenger has lost patience with Nicklas Bendtner following the Dane’s latest controversial off-pitch incident.

Wenger sent scouts to assess Atletico Madrid striker Diego Costa earlier in the season but the Frenchman will not be following up that interest with a summer bid. The Brazil-born Spain international has agreed a deal to join Chelsea.