The reigning champions discovered who they will face in the early stages on Thursday, with Bayern Munich, Man City, Roma and CSKA Moscow the best candidate as the Group of Death

Carlo Ancelotti’s men achieved la Decima in May with a final win over Atletico Madrid and they will also face Swiss side Basel and Bulgarian champions Ludogorets in Group B as they try to become to first team in Champions League history to win back-to-back titles.

Bayern Munich, coached by former winner Pep Guardiola, will aim for their fourth final in six years but have arguably been handed the Group of Death as they will need to overcome Premier League winners Manchester City, Russian side CSKA Moscow and Serie A runners-up Roma to get out of Group E.

Chelsea, Champions League victors in 2011-12, were given a relatively straightforward draw as they face out-of-sorts Schalke, Portuguese opposition Sporting and Slovenian side Maribor.

Arsenal are still without a Champions League title to their name and they will have a bumpy ride just reaching the last 16 as 2012-13 finalists Borussia Dortmund, Galatasaray and Belgian champions Anderlecht provide competition.

Atletico Madrid, runners up last season after taking Real Madrid to extra time, will be confident they can share one of the top two spots with Scudetto holders Juventus, Olympiakos and outsiders Malmo.

Contrastingly, Porto will be confident of making amends for failing to reach the knockout stages in 2013-14 after being drawn alongside Shakhtar Donetsk, Athletic Bilbao and BATE.

Each of the top two teams will qualify for the last 16 draw in December. The 2013-14 final, the 60th organised by Uefa, will be held at the Olympiastadion in Berlin on June 6. 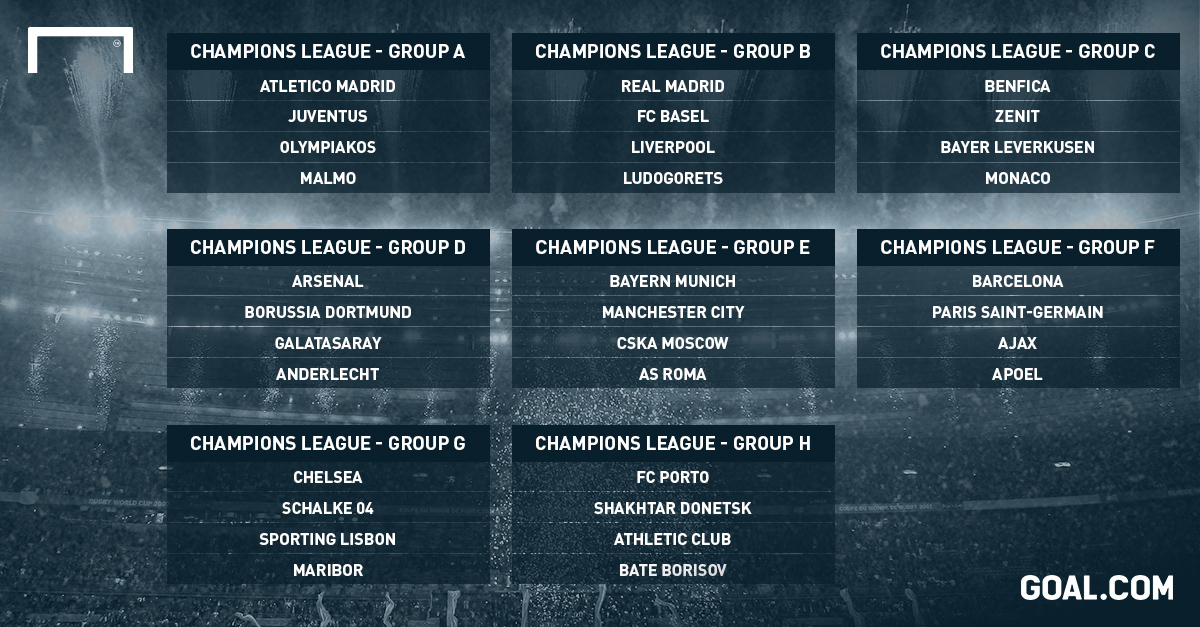