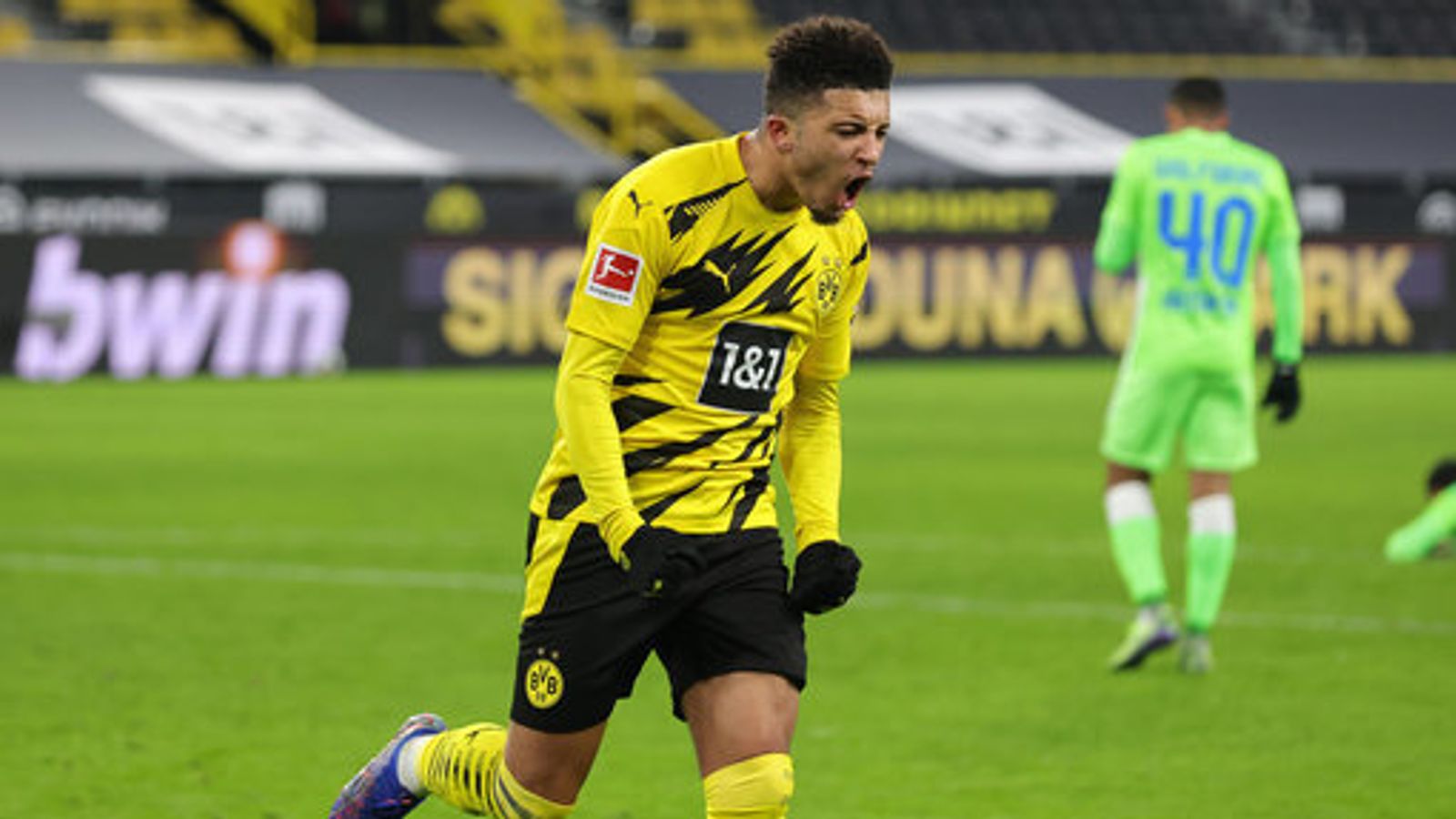 Jadon Sancho scored his first Bundesliga goal of the season as Borussia Dortmund returned from the winter break with a 2-0 win over Wolfsburg.

Sancho only made sure of the result on a counter-attack in injury time, shrugging off defender Paulo Otvios challenge before firing inside the right post when he just had the goalkeeper to beat.

It was the England forward’s first goal in his 12th league appearance this season, a marked decline from last season when he had 17.

Sancho got his sixth assist of this season though when he sent in the corner for Manuel Akanjis breakthrough in the 66th minute, but it had been a frustrating game for Dortmund despite star striker Erling Haaland’s return from a month out with a muscle injury.

Bayern Munich survived a scare from lowly Mainz before returning to the top of the Bundesliga with a 5-2 win in the late game.

The defending champions were stunned to be 2-0 down at the break, though perhaps it was no surprise as it marked the eighth consecutive game in which Bayern conceded first.

Jonathan Burkardt shrugged off Jerome Boateng’s meek challenge before opening the scoring in the 32nd minute and Alexander Hack headed in Daniel Brosinskis free-kick after Boateng had fouled Burkardt.

Mainz captain Danny Latza hit the post after the break, and then Bayern struck back.

Lewandowski set up Joshua Kimmich in the 50th, six minutes before Kimmich laid the ball off for Leroy Sane to equalize.

Robin Quaison rattled the crossbar for Mainz before Bayern was celebrating again when Alphonso Davies forced an own goal from Leandro Barreiro.

VAR provided the visitors some respite after finding Davies was marginally offside, but there nothing wrong with Niklas Sles goal for Bayern in the 70th. Lewandowski added a penalty six minutes later, then scored his 19th goal of the season to wrap it up.

Suarez scored from close range completing a cross by Joao Felix after Atletico had conceded an equalizer in the 84th minute.

Suarez had helped Atletico take the lead with a 41st-minute assist to Marcos Llorente, who cleared three defenders outside the area before firing a low shot that deflected off a defender before finding the net.

Alaves lost defender Victor Laguardia with a straight red card determined by video review for a hard foul on Thomas Lemar. The hosts equalized when Atletico defender Felipe found his own net while trying to clear a cross inside the area.

The win left Athletic in ninth place, while Elche stayed 17th, just outside the relegation zone.

Serie A: Milan back on top

A goal in each half earned 10-man AC Milan a 2-0 victory at Benevento in Serie A which propelled them back to the top of the standings on Sunday.

City rivals Inter Milan had thrashed Crotone 6-2 to go top earlier on Sunday but Milan soon found themselves in front in Campania thanks to Franck Kessie’s 15th-minute penalty.

Milan’s task was made more difficult after Sandro Tonali was sent off in the 33rd minute following a VAR review. The referee had initially shown the midfielder a yellow card for a dangerous tackle but changed it to red after consulting the pitch-side monitor.

Rafael Leao made it 2-0 four minutes into the second half, while the hosts missed a penalty. Milan remain unbeaten and have 37 points from 15 games, one point ahead of Inter, while Benevento stay 10th.

Lautaro Martinez netted a hat-trick to help Inter Milan beat relegation-threatened Crotone 6-2. Martinez could have had four if his second attempt had not gone down as an own goal by Crotone defender Luca Marrone.

Romelu Lukaku and Achraf Hakimi also scored in a strong second-half performance from the Nerazzurri. Duvan Zapata scored twice as Atalanta beat Sassuolo 5-1 to close in on its opponent in the battle for the top four.

Sassuolo slipped to fifth, two points behind fourth-place Napoli after Gennaro Gattuso’s side won 4-1 at Cagliari despite playing 18 minutes with 10 men after Piotr Zielinski was sent off following two yellow cards.

At the other end of the table, Torino moved off bottom spot and out of the relegation zone with a 3-0 win at Parma.

Spezia slipped into the bottom three after losing 1-0 at home to Hellas Verona. Genoa, the other team in the relegation zone, managed to draw 1-1 against Lazio. Fiorentina drew 0-0 against Bologna.