Lacklustre Juventus began life without Cristiano Ronaldo by suffering a shock 1-0 defeat at home to promoted Empoli in Serie A on Saturday.

Juve, who this week agreed a deal with Manchester United to sell Ronaldo to the Premier League club, looked shorn of ideas up front in the Portuguese forward’s absence.

Other than some fierce Federico Chiesa strikes from range, the hosts did not threaten to score in the first half as Empoli edged into a surprise lead when captain Leonardo Mancuso swept the ball home at the far post in the 21st minute.

After the break, Juventus coach Massimiliano Allegri introduced Alvaro Morata, Dejan Kulusevski and new signing Manuel Locatelli from the bench but, even with all that firepower on the pitch, they created few openings of note.

Empoli saw out their first win back in the Italian top flight in relative comfort, leaving Juve on one point from their opening two matches of the season.

Ciro Immobile’s hat-trick inspired Lazio to a 6-1 thrashing of Spezia as the Rome club made it two wins from two at the start of the new Serie A season in style on Saturday.

The visitors did take the lead in the fourth minute, with Daniele Verde on hand at the back post to tap home, but that lasted less than one minute as Immobile pounced to level.

The Italy striker then arrowed a brilliant strike into the net to give his side the advantage inside 15 minutes, before missing a penalty just before the break. Immobile almost immediately completed a hat-trick though as he made it 3-1 in first-half stoppage time.

Lazio’s close-season signing Felipe Anderson raced clear to add a fourth two minutes into the second period, before Spezia’s task was made all the more difficult after Kelvin Amian was sent off in the 54th minute.

Elseid Hysaj and Luis Alberto completed the rout as Maurizio Sarri’s men climbed to the top of the standings, above Inter Milan on goal difference.

In Saturday’s other early kick-off, last season’s top Serie A scorers Atalanta were held to a disappointing 0-0 stalemate by Bologna in Bergamo.

Bayern Munich’s Robert Lewandowski continued his imperious form with a superb hat-trick as they cruised past Hertha Berlin with a 5-0 win at the Allianz Arena on Saturday.

The Poland striker has scored at least once in each of his last 16 official matches for Bayern, bettering Gerd Mueller’s record of netting in 15 consecutive games between 1969 and 1970.

The victory left Bayern second in the Bundesliga, behind Bayer Leverkusen on goal difference, with seven points from three games. Hertha sit bottom of the table having lost all their games so far. 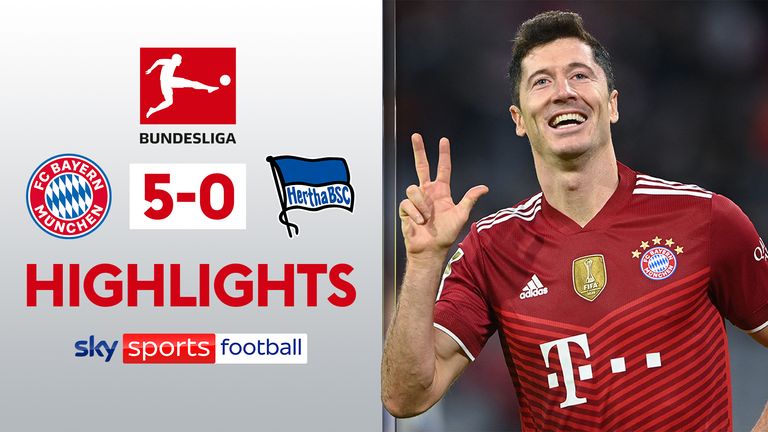 Thomas Muller struck for the German champions after six minutes, finishing off a slick team move, before Lewandowski doubled the advantage half an hour later, heading in from a Serge Gnabry cross.

Hertha did their best to press Bayern higher up the pitch but struggled to create clear opportunities as the home side’s wide men took full advantage of the space left behind.

Bayern continued their assault in the second half, with substitute Jamal Musiala grabbing a third soon after the break and Lewandowski adding two more for a hat-trick, his second goal made possible by some brilliant wing play from Leroy Sane.

Meanwhile, Bayern Leverkusen had plenty of help as they won 4-1 at Augsburg on Saturday to top the Bundesliga, with the hapless hosts gifting them two own goals in the opening 14 minutes.

Augsburg went behind in the fourth minute when left-back Iago put the ball into his own net and were two down 10 minutes later when Florian Niederlechner deflected a shot past his own goalkeeper.

Niederlechner pulled one back in the 31st, snapping up the ball after a defensive error and slotting it into net but Leverkusen added two more goals in the second half to secure a comfortable win.

Leverkusen lead the league on seven points after their opening three matches, ahead of Bayern Munich on goal difference.

Sevilla had to make do with a point as they were held to a 1-1 draw at Elche in La Liga on Sunday, ending their 100 per cent start to the season.

Elche, who avoided relegation on the final day of last term, took the lead through centre-back Enzo Roco in the 11th minute after an exquisite through ball from Fidel Chaves.

Sevilla levelled in the 40th minute with a header from last season’s top scorer Youssef En-Nesyri and went all out for the win late in the game.

New striker Rafa Mir had two good chances to snatch victory, skying a first-time strike from inside the area before heading over the bar with the final opportunity of the game deep in stoppage time.

Sevilla have seven points from their opening three games after beating Rayo Vallecano 3-0 and Getafe 1-0 while Elche have two.

Real Sociedad beat Levante 1-0 at home thanks to an Ander Barrenetxea strike shortly before half-time to reach six points and end the visitors’ unbeaten start to the campaign.

Nice hammered Bordeaux 4-0 to continue their fine start to the Ligue 1 season on Saturday a week after crowd trouble marred their previous outing.

In a game played behind closed doors pending investigations into the incidents that caused their home match against Marseille to be abandoned last Sunday, Nice prevailed through an early Justin Kluivert goal, a double by Amine Gouiri and Khephren Thuram’s late strike.

The result lifted them to second on seven points from three completed matches, two behind Paris Saint-Germain, who travel to Reims on Sunday.

Dutch winger Kluivert opened the scoring after seven minutes when he volleyed home from Hicham Boudaoui’s cross to give Christophe Galtier’s side a perfect start.

He also assisted in the second goal, playing Gouiri through for the striker to finish the job with a left-footed effort on 33 minutes.

Kluivert then limped off the pitch but Galtier said he was taken out only as a precaution after feeling pain in his groin.

Gouiri made it 3-0 three minutes before the interval as he converted a penalty after being brought down by centre-back Laurent Koscielny.

Thuram, the former French international Lilian’s second son and brother of France striker Marcus, added another with five minutes left from inside the area shortly after coming on as a substitute.

Bordeaux, who have yet to win a game this season, are 17th with two points from four outings.

Marseille are fifth after Cengiz Under found the net for the third time this season in a 3-1 home victory against St Etienne.

Turkey striker Under, who joined from AS Roma in the close season, added to Matteo Guendouzi and Gerson’s goals with a fine curled strike to put the hosts on seven points from three games.