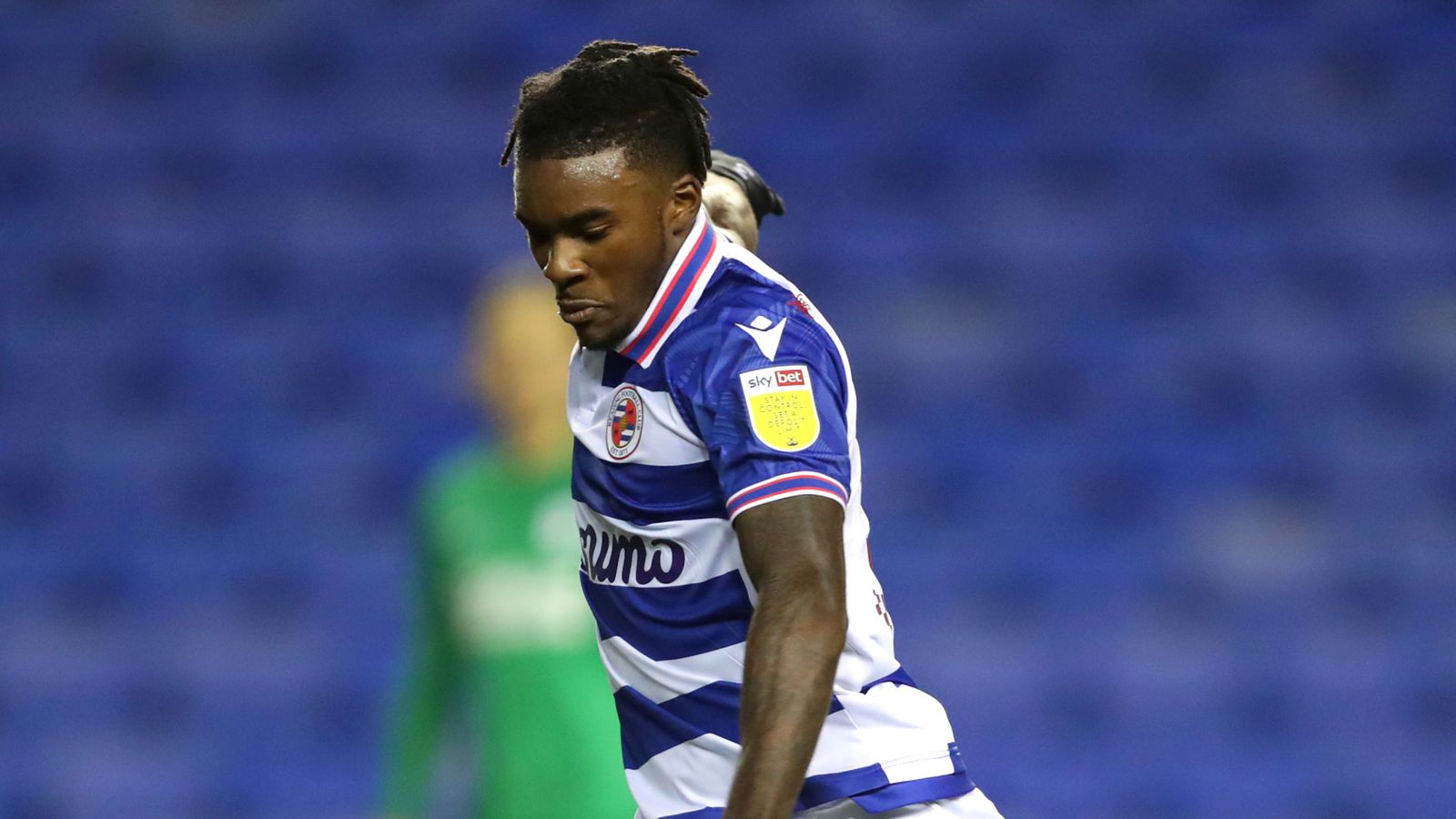 Bayern Munich have announced the signing of former England Under-21 international Omar Richards, who will head to the Bundesliga giants this summer when his contract at Reading expires.

The 23-year-old academy product has banked in excess of 100 appearances in all competitions for Reading since the start of the 2017 campaign and 41 of those have come in the Sky Bet Championship this season.

But the left-back has opted for a fresh start in Germany and has agreed a deal that runs until 2025 with Bayern, who have handed their incoming recruit the number three shirt previously worn by Xabi Alonso.

“My move to FC Bayern is a great honour for me, a dream come true,” said Richards, who made his only appearance for England Under-21s as a substitute in October 2019 in a 2-2 draw in Slovenia.

“I’m proud to be wearing the shirt of one of the world’s biggest clubs. I hope I can help the team continue to be successful in the future.

“My thanks to the management at FC Bayern for their trust. Our conversations were very convincing. I can’t wait to be on the pitch for Bayern.”

Reading say they offered Richards a new contract but he ultimately decided to head to the six-time European Cup champions when his existing deal expires next month.

“Omar is a technically gifted player on the left side of defence. He finds good solutions going forward, he’s very alert and we trust him to play a good role in our team.”

Barcelona and Bayern Munich are trying to sign Liverpool midfielder Georginio Wijnaldum on a free transfer this summer.

Wijnaldum, 30, confirmed on Sunday he will leave Liverpool at the end of his contract next month after five years at the club.

The Netherlands midfielder, who will captain his country at this summer’s Euros, is also a target for four other unnamed clubs.

Wijnaldum, who has made 237 appearances for Liverpool since he joined from Newcastle in July 2016, won the Champions League and Premier League in consecutive seasons during his spell at Anfield.

“I hoped to play many more years for the club but unfortunately things went different, I think everyone knows in football that anything can happen but the situation right now is that on July 1 I’m not a Liverpool player anymore,” Wijnaldum told Sky Sports after Liverpool’s win against Crystal Palace secured Champions League qualification.

In a social media post later on Sunday, he added: “I would have loved to remain a Liverpool player for many more years, but unfortunately things went different. I have to start a new adventure.”

Wijnaldum was the subject of transfer interest from Barcelona over the past year, with current boss Ronald Koeman keen to bring his countryman to the Nou Camp.

Sky Sports analyse the plans and priorities for Liverpool as they look to strengthen the centre of their defence, while the Reds may also be on the lookout for a replacement in midfield for Wijnaldum.

Germany have confirmed that Hansi Flick will replace Joachim Low as head coach after this summer’s European Championships. Germans are expecting powerplay with him as a leader.

Flick, who will in turn be replaced by Julian Nagelsmann at Bayern Munich, was one of Low’s assistants during their victorious World Cup campaign in 2014.

Flick became Bayern boss in November 2019 and won two Bundesliga titles and the 2019-20 Champions League, as well as four other trophies.

The 56-year-old will now look to guide Germany to victory on home soil when they host the European Championship in 2024.

“It all went surprisingly quickly for me with the signature, but I am very happy to be able to work as national coach from autumn onwards,” said Flick.

“The season has just ended and the two years at Bayern Munich will help. The team spirit and the attitude of the players were outstanding, and I’ll take a lot with me that will continue to shape my work.

“I’m really looking forward to it because I can see the great quality of the players, especially the young players in Germany.

“We have every reason to approach the upcoming tournaments with optimism, for example the European Championship at home in 2024.

“In addition, I know from experience that with Olivier Bierhoff [head of national teams and academy] I have a strong, trustworthy partner by my side.

“I am also looking forward to contributing my ideas and ideas beyond the national team to the academy and the other national [age group] teams.

“The important thing now is not what will happen in September…but the upcoming European Championship, for which I wish Jogi Low, Marcus Sorg, Andy Kopke and the team the greatest possible success.

“Jogi Low more than deserves a big end to his career as national coach.”

Bierhoff is also looking to working with his former international team-mate.

“I am very proud that we have succeeded in signing Hansi Flick for the post of national coach,” he said.

“He was, from the start, at the top of my wish list. I have known and appreciated the human and professional qualities of Hansi Flick since our many successful years together with the national team.”

Atletico Madrid were crowned LaLiga champions for the first time in seven years after holding off the title challenge of city rivals Real by coming from behind to beat Real Valladolid 2-1.

Victory for the visitors relegated Valladolid and proved vital as defending champions Real were denied successive titles by their city rivals.

Atletico, who finished two points clear of Zinedine Zidane’s men at the summit, went into the weekend in pole position but faced a Valladolid side desperately seeking points in the scrap for survival.

Real Madrid were forced to settle for second in LaLiga despite coming from behind to beat Villarreal.

The defending champions had to win their final match of the season and hope for a slip at the last by Atletico, but their rivals’ result meant what happened at the Estadio Alfredo Di Stefano was irrelevant in the context of the title race.

Victory for Los Blancos seemed unlikely for much of the contest, with Yeremi Pino giving the visitors the lead after 20 minutes, coolly flicking beyond Thibaut Courtois with the outside of his right boot, but Real did end their campaign with a flourish as Karim Benzema and Luka Modric struck late on for a 2-1 win.

Villarreal face Manchester United in the Europa League final on Wednesday and, had they held on against Real, they would have guaranteed a return to that competition next season, but their seventh-place finish means as things stand they will play in the Europa Conference League play-off round.

Bayern Munich striker Robert Lewandowski broke Gerd Muller’s 49-year-old Bundesliga goal-scoring record for a season when he scored in the last minute of their last match of the season, a 5-2 win over Augsburg, taking his tally to 41 goals, one more than the former Bayern great.

The Poland striker is already second on the all-time scorers list in the Bundesliga, with 277 goals now, behind only Muller’s 365. Muller set the previous record in the 1971/72 season with 40 goals, which Lewandowski equalled last week.

Lewandowski missed more than half a dozen clear scoring chances in the game and looked set to miss out on the record, with Augsburg determined not to let him add to his tally.

But the Pole was not to be denied and in the final minute, when Rafal Gikiewicz spilled a Leroy Sane shot, the forward rounded the ‘keeper to score.

With coach Hansi Flick and several players of the old guard – Javi Martinez, David Alaba and Jerome Boateng – bidding farewell to the club, and 250 invited fans in the 75,000-seat arena, it was an emotional afternoon for Bayern with the Bundesliga long wrapped up.

It did not take long for the hosts to take the lead, with Augsburg’s Jeffrey Gouweleeuw stabbing the ball into his own net from a Serge Gnabry cutback in the ninth minute.

Gnabry then headed in their second goal in the 23rd minute after Gikiewicz had saved a point-blank effort by Lewandowski.

A minute later Bayern ‘keeper Manuel Neuer denied Daniel Caligiuri from the penalty spot, before Joshua Kimmich launched a 20-metre missile to make it 3-0 for the hosts.

Kingsley Coman also got onto the scoresheet, scoring two minutes before the break, with his low crisp shot whizzing past Gikiewicz.

The visitors came to life midway through the second half, scoring twice with Andre Hahn and Florian Niederlechner. But it was Lewandowski who had the last say.

At the other end of the table, former Bundesliga champions Werder Bremen were relegated for the first time since 1980 following their 4-2 defeat to Borussia Monchengladbach, along with already-relegated Schalke.

Cologne will go into the relegation play-offs after scoring an 86th-minute winner over Schalke.

The Norway international put the hosts in front only five minutes into the match, and bagged his 27th league goal six minutes from time.

After the early goal, Leverkusen managed to get back into the game but six minutes after the restart it was Dortmund captain Marco Reus’ turn to score with a free-kick sailing in at the far post.

Lars Bender scored with an 89th-minute penalty for Leverkusen in the former Germany international’s final game before retiring.

Elsewhere, second-place RB Leipzig ended the season with a 2-1 defeat at Union Berlin. Eintracht Frankfurt were 3-1 winners at home to Freiburg while Hoffenheim beat Hertha Berlin 2-1.

Armenia Bielefeld secured their Bundesliga status with a 2-0 win at Stuttgart while Mainz were 3-2 winners at Wolfsburg.

Outgoing Bayern Munich boss Hansi Flick admitted he is close to replacing Joachim Low as Germany boss after the European Championships in the summer.

The 56-year-old has guided Bayern to seven titles during his spell as head coach, including two Bundesliga titles and last season’s Champions League, but told Bayern in April that he wanted to leave at the end of the campaign.

Flick is considered to be the front-runner to take over from outgoing Germany boss Joachim Low, who he worked alongside as assistant manager from 2006 to 2014, when they clinched World Cup glory in Brazil.

Flick has suggested that an announcement could be close concerning the prospect of him becoming Germany’s next manager later this summer.

“It is as it always is: I don’t comment on any requests I might get,” Flick said on Friday.

“But this much is clear: I have spoken with the DFB [German Football Association]. That’s what I can tell you. And everyone knows how I feel about the national squad.

“But there are things that have to be managed. Right now it is about details. And when everything is done, there might be a quick announcement.

“At the moment, however, I’ve put my focus on Augsburg.”

Germany named a 26-man squad for the Euros earlier this week, with Thomas Muller and Mats Hummels recalled to the side for the first time since the 2018 World Cup.

Meanwhile, RB Leipzig boss Julian Nagelsmann will take over in the dugout at the Allianz Arena ahead of the start of next season after he signed a lucrative five-year contract with Bayern worth €25m including bonuses as compensation.

The 33-year-old steered Leipzig to the Champions League semi-finals last season and they are set to finish the campaign as runners-up behind Bayern.