Karim Benzema’s fine run of form continued with a double as Real Madrid won 3-1 at Celta Vigo to move up to second place in La Liga.

Zinedine Zidane’s side needed to take advantage of playing a day before neighbours Atletico and rivals Barcelona.

They did just that with a victory at Abanca-Balaidos as Benzema struck twice, Santi Mina halving the arrears before Marco Asensio wrapped up the points late on.

Benzema made it eight goals in his last six games and opened the scoring with a well-taken finish on the 20-minute mark.

The France forward collected a pass from Toni Kroos and finished coolly from 12 yards to put the visitors in front.

The same duo would combine to double Real’s lead as Celta were caught trying to play out from the back and Kroos nipped the ball off Renato Tapia before once again picking out Benzema, who made no mistake.

Madrid were well on top but would not have it all their own way as the home side pulled one back before the break.

Mina timed his run perfectly to break the visitors’ high defensive line and head in a Denis Suarez free-kick.

After the interval, Celta enjoyed more of the ball and Iago Aspas saw a shot well saved by Thibaut Courtois just after the hour.

Aspas would go even closer, hitting the post with just eight minutes left, only for Real to make sure of the points in stoppage time – Benzema this time turning provider, crossing in for Asensio to head in from close range.

In the day’s other game, mid-table Athletic Bilbao drew 1-1 at home to struggling Eibar.

Record-chasing Robert Lewandowski scored a first-half hat-trick on Saturday as 10-man Bayern Munich kept their four-point lead at the top of the Bundesliga with a 4-0 win over Stuttgart.

Bayern only started playing well after Canadian youngster Alphonso Davies was sent off for a bad tackle on Stuttgart’s Wataru Endo in the 12th minute. The defending champions’ response kept second-place Leipzig at bay before the teams meet on April 4.

“I’m thinking from game to game, and not of how many goals I must score to break this record,” said Lewandowski, who eclipsed Klaus Fischers’s haul from between 1968-88 to move second in the all-time top Bundesliga scorers list.

“I’m happy with how the team played in the first half. The red card woke us up”, Lewandowski said.

Davies was initially shown a yellow card for landing with his studs on Endos’ ankle, but a VAR check upgraded it to a red.

The sending-off only seemed to rouse his team-mates. Serge Gnabry crossed for Lewandowski to open his account in the 18th minute, four minutes before Thomas Muller and Leroy Sane played their way through the Stuttgart defence for Gnabry to get Bayern’s second goal.

Muller set up Lewandowski’s second a minute later and the Poland star completed his hat-trick in the 39th minute after being set up by Sane.

Stuttgart’s Sasa Kalajdzic, who had scored in each of his last seven appearances, missed some good chances in the second half for the visitors.

Meanwhile, Erling Haaland scored his second goal late on to salvage a 2-2 draw for Borussia Dortmund at Cologne, but the visitors dropped four points behind fourth-place Eintracht Frankfurt, who emerged from a bruising game with a 5-2 win over Union Berlin.

Both Haaland and Frankfurt forward Andr Silva took their Bundesliga goal tallies this season to 21.

Silva got Frankfurt off to a great start in the second minute, but Max Kruse equalised five minutes later and Union went on to create a host of chances.

Frankfurt midfielder Djibril Sow cleared off the line three times, before Union’s Robert Andrich kicked the ball into his own net in the 35th minute. Goalkeeper Andreas Luthe slipped as he tried to reach the back pass, but Andrich had likely struck it too hard anyway.

Silva set up Filip Kostic four minutes later, shortly before the Portugal striker grabbed his second of the game. Kruse scored his second in first-half injury-time to give the visitors some hope, but American defender Timothy Chandler removed any doubt for Frankfurt in injury-time. It was Chandler’s first goal of the season and his 13th in 222 Bundesliga games.

Union had 25 efforts at goal, compared to the home side’s nine. 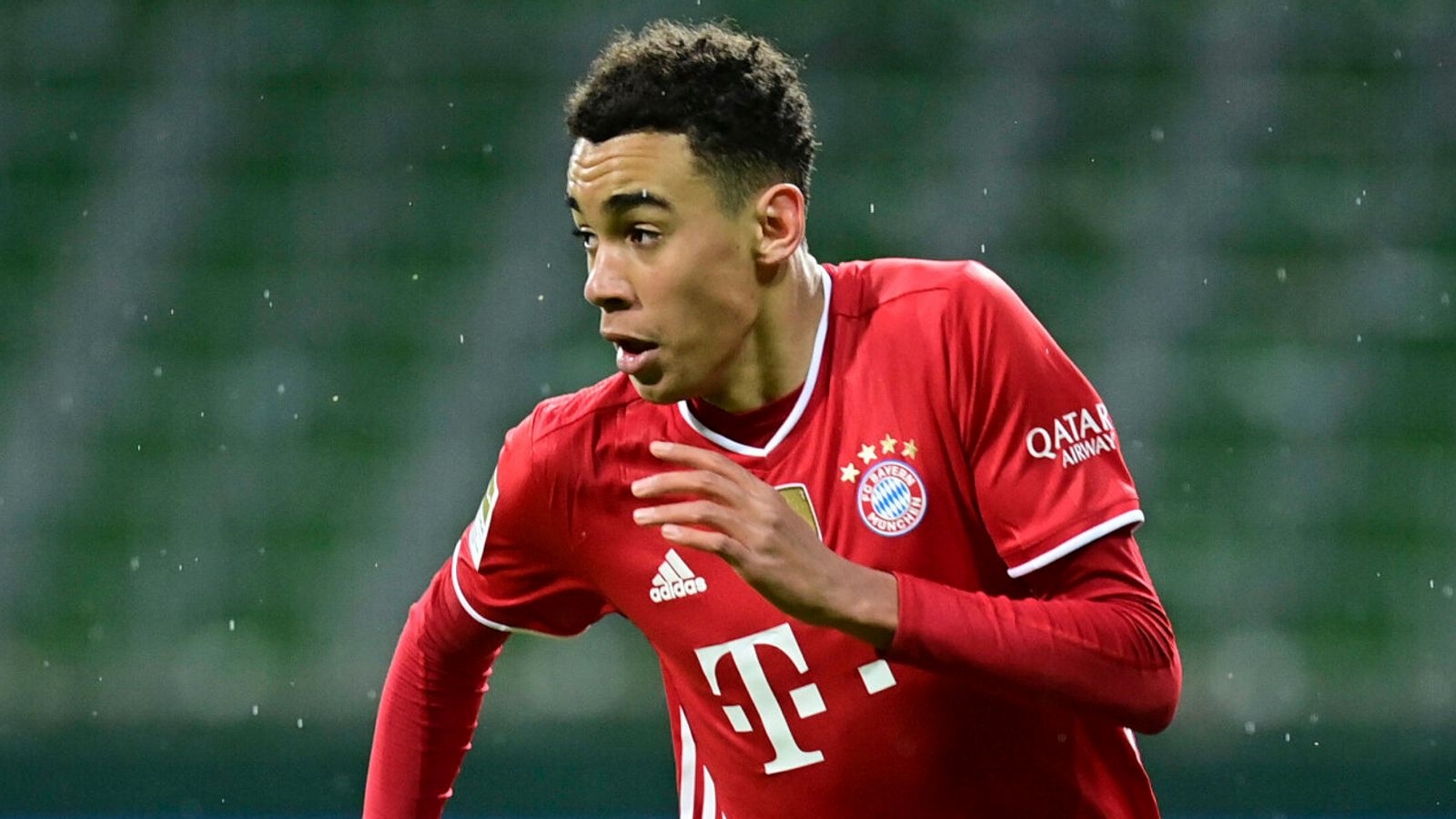 Bayern Munich teenager Jamal Musiala, who played for England’s youth teams but then chose to represent Germany, has been called up by Joachim Loew for the first time.

The 18-year-old midfielder has been included in a 26-man squad for this month’s World Cup qualifiers against Iceland, Romania and North Macedonia.

Musiala, born in Stuttgart to a German mother and a British-Nigerian father, has represented England at youth team level on 22 occasions and took part in the last two training camps with Aidy Boothroyd’s U21 side.

However, despite admitting to being torn between the two countries, he confirmed last month that he wished to represent the country of his birth.

Meanwhile, Germany’s Premier League players arriving from England have been granted special exemptions from Covid-19 quarantine restrictions as long as they provide a negative test result not more than 24 hours old at the time of their departure.

Germany play Iceland on March 25, Romania on March 28 and North Macedonia on March 31 in what will be Loew’s final World Cup qualifiers before he steps down at the end of this year’s European Championship.

Bayern Munich are refusing to allow Robert Lewandowski and David Alaba to join up with their respective countries for games in the UK over the international break.

Under the current strict coronavirus protocols in place in Germany, Bundesliga and Bundesliga 2 players would have to quarantine for 14 days upon returning from a “mutation zone” nation.

Poland are due to play England at Wembley on March 31, while Austria will face Scotland at Hampden Park on March 25.

“If it remains the case that the returnees from England have to go into quarantine, we will not be able to put Lewandowski down,” Bayern sporting director Hasan Salihamidzic said to German news agency Sport-Informations-Dienst.

When questioned about it during his press conference on Friday, Hansi Flick confirmed: “We will not agree. If something changes, though, we’ll support that.”

Scotland will already face a weakened Austria side due to the fact that several regular players in Austria’s squad are based in the German top flight.

Because of the mandatory quarantine period, if Lewandowski and Alaba were allowed to travel to the UK they would miss Bayern’s clash with RB Leipzig on April 3, both legs of the Champions League quarter-final with PSG (April 6 and April 12) and the game with Union Berlin on April 10.

Liverpool have been drawn against Real Madrid in the Champions League quarter-finals, a repeat of the 2018 final, with Chelsea facing Porto and Manchester City taking on Borussia Dortmund.

The semi-final draw also took place on Friday, with Liverpool and Chelsea set to meet in the last four should both progress, while City could play Bayern or PSG for a place in the final.

Of the three English sides remaining, Liverpool arguably have the toughest draw against Spanish champions Real, who beat Jurgen Klopp’s side 3-1 three years ago in Kiev.

Liverpool overcame RB Leipzig 4-0 on aggregate to reach the quarters this time around, and speaking before the draw Klopp said he is hoping to regain momentum in the Premier League to help their Champions League bid.

“The only reasons you play in this competition is because you want to win it,” Klopp said after beating Leipzig last week. “We aren’t silly and so far, this season it is not one which looks like we will win the Champions League in the end.

After beating Atletico Madrid 3-0 on aggregate in the last 16, Chelsea take on Portuguese champions Porto, who stunned Juventus in the previous round to progress.

“They play with a special bond and performances and results like this give you a certain edge and glue to achieve special things. You can only achieve this through results and experiences,” Tuchel said after Wednesday’s 2-0 win over Atletico.

“I’m pretty sure no one wants to play against us. It’s a super-difficult challenge ahead because we are already in the last eight. It’s a big step, but no need to be afraid, we take what we get and prepare as best as possible.”

A potential semi-final meeting between Chelsea and Liverpool would see the two sides renew their Champions League rivalry.

Liverpool and Chelsea last met in the Champions League in 2009, having played one another in five consecutive seasons from 2004-05 – at the semi-final stage three times, the quarter-final once and also in the group stages in 2005-06.

The two sides also played in the 2019 UEFA Super Cup, with Liverpool winning 5-4 on penalties following a 2-2 draw after extra time.

Meanwhile, City continue their pursuit for the ‘Quadruple’ against another Bundesliga side in Dortmund after beating Borussia Monchengladbach 4-0 on aggregate.

City have exited at the quarter-final stage the past three seasons, and head coach Pep Guardiola is not looking too far ahead with the Premier League leaders first taking on Everton in the FA Cup quarter-finals this weekend before playing Leicester in April, live on Sky Sports, after the March international break.

“That is why we had to forget about the quarter-finals and just win this game. We have to do what we have done in the previous seasons.”

Jadon Sancho could line up against his former side City having swapped Manchester for Dortmund back in 2017.

Sancho missed the last-16 second leg against Sevilla as Erling Haaland steered the German club into the quarters, with England midfielder Jude Bellingham also impressing in the 2-2 draw, enough for a 5-4 win on aggregate.

When and where is the Champions League final?

The Champions League final will take place on Saturday, May 29 at the Ataturk Olympic Stadium in Istanbul, Turkey, which was set to host the 2020 showpiece before Covid postponed the tournament. In August it was eventually completed from the quarter-final stage onwards in Lisbon.

The Ataturk Olympic Stadium stadium was the stage of Liverpool’s infamous ‘Miracle of Istanbul’ comeback victory over AC Milan in the 2005 Champions League final.

German duo Havertz and Werner joined Chelsea from Bayer Leverkusen and RB Leipzig respectively during the 2020 summer transfer window for a combined £120m.

Having won the Champions League, the DFB-Pokal and an eighth consecutive Bundesliga title in 2019/20, Bayern bolstered their wide attacking options going into the new season with the arrivals of Sane from Manchester City and Douglas Costa on a season-long loan from Juventus.

Bayern are long-term admirers of Callum Hudson-Odoi and have tabled multiple bids for the 20-year-old over the last few seasons.

The latest offer, made during the final days of last season’s summer window, was a season-long loan which included a £70m option to buy, but the approach was rejected by Chelsea.

Sergino Dest was also linked with the club, but the right-back moved to Barcelona from Ajax in an £19m deal.

Speaking after Bayern progressed to the Champions League quarter-finals with a 6-2 aggregate win over Lazio, Flick told Sky Germany: “People always say, Hudson-Odoi and Dest were my players of choice, they were our players of choice.

“We decided that we wanted to add players with width and that is what we did.

“Havertz, Werner or Sane were also mentioned, I would have preferred to have all three, but we all decided on Sane.

“He is a player who also makes the difference in the end.”